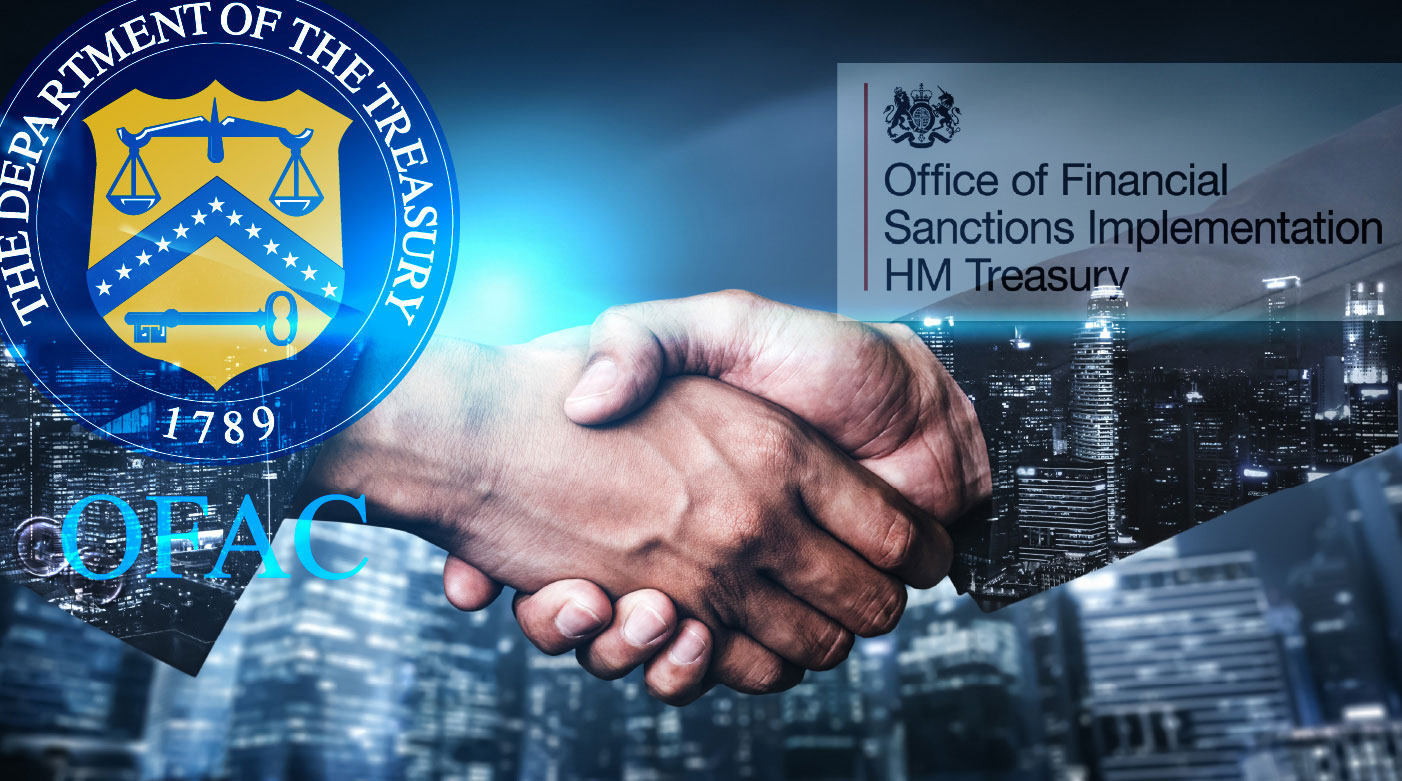 Since leaving the European Union, the UK has zealously orchestrated its sanctions program. OFSI (Office of Financial Sanctions Implementation) has grown like an inflated balloon to keep up with the proliferation of sanctions largely caused by Russia’s invasion of Ukraine. OFSI drew inspiration from OFAC (Office of Foreign Assets Control), in effect, the sanctions brand leader. Both government agencies are better known by their acronyms than their full names – although it is highly unlikely that OFAC and OFSI will enter the language like radar and scuba, whose full names – “radio detection and ranging” and “self-contained underwater breathing apparatus” – are largely forgotten.

In October, OFAC and OFSI jointly declared they would “deepen” cooperation further. OFAC director Andrea Gacki and OFSI director Giles Thomson said the plan is to enhance the organizations’ capabilities and the support both provide. “Doing so will further build on the aims of the US Department of the Treasury’s 2021 Sanctions Review and support OFSI’s move to a larger and more proactive organization.”

The statement followed a multi-day “technical exchange” in London between the two offices.

“In practice, this means that over the coming months OFAC and OFSI officials working on implementation and enforcement will be further exchanging best practices and strengthening working relationships at all levels. We will identify opportunities to pool expertise, to think creatively about the challenges we face, to explore opportunities to align the way we implement sanctions, and to assist our stakeholders either through joint products or by providing guidance resulting from collaboration behind the scenes,” the statement says.

“The beginnings of this work are already underway, as OFAC and OFSI work together to develop approaches to address shared priorities like cyber threats and the misuse of virtual assets, improving information sharing, and ensuring that our sanctions do not prevent humanitarian trade and assistance from reaching those in need,” it says.

The statement says that cooperation will make sanctions work better as a political tool. “Financial sanctions work best when implemented multilaterally. This maximizes their impact, minimizes unintended consequences, and eases the burden of compliance for business. Throughout the current crisis, the United Kingdom and the United States have made efforts to design, communicate, and implement new sanctions in close coordination with each other as well as with other key allies and partners.”

Increased Engagement with Both Offices Welcomed

Both organizations paid compliments to the businesses and individuals who have helped implement sanctions programs.

“The commitment and willingness of stakeholders to constructively engage with us have been very welcome. We will of course continue, in close coordination with one another, to assist stakeholders via our outreach, by maintaining and updating sanctions-related products to provide useful information and guidance, and by making timely decisions regarding licenses.

“This year alone, in administering Russia-related sanctions, OFAC has issued over 100 ‘frequently asked questions,’ two humanitarian-related fact sheets, over 2,000 responses to specific license and interpretive guidance requests, and over 50 general licenses, and engages regularly with stakeholders, including private sector entities, financial institutions, and non-government organizations. Meanwhile, OFSI has updated its ‘Russia, monetary penalty and general guidance,’ engaged extensively with industry through webinars, roundtables and bespoke meetings, issued over 30 general licenses, and is increasing its resource to over 100 staff members by the end of the financial year.”

The statement declares that the partnership will not be limited to contending with Russia’s aggression. “Over time, we expect to realize the benefits of our collaboration not only in relation to the sanctions imposed in response to Russia’s invasion of Ukraine but also across other common sanctions regimes.”

“Russia’s invasion of Ukraine saw authorities around the world collaborate on an unprecedented scale. We can only expect that trend to continue given the current geopolitical tensions globally,” Mr Northage said.

“This level of cooperation is not just evident in the field of sanctions. We have seen it in relation to joint data protection investigations and enforcement. As governments, regulators and other bodies wrestle with the regulation of new technologies including crypto assets, whose borderless and decentralized nature is not strictly bound by the limits of traditional physical borders or legal systems.

“Indeed, the announcement indicates that OFSI and OFAC see their work together to develop approaches to address shared priorities like cyber threats and the misuse of virtual assets, as a priority. One of the points made in the US Department of Treasury’s 2021 Sanctions Review is that sanctions are most effective when coordinated, including with allies and partners who can magnify the economic and political impact,” Mr Northage said.

“Sanctions are most effective in changing behavior where there is a consistent multilateral approach,” Mr Martin said. “If OFSI and OFAC can work together to align their approach that has the potential to increase the effectiveness of existing measures while making it harder for them to be circumvented.”

Favorable Reaction in the US

The announcement was also greeted favorably in the US. Daniel Maloney, a former OFAC sanctions investigator and now associate director, financial crimes compliance at consultancy firm Protiviti, said: “When sanctions investigators are leading efforts to respond to conflicts around the world, working directly with partners like OFSI can help both countries share key information on the case and helps launch joint actions for maximum impact. OFAC’s and OFSI’s increased coordination will help connect Investigators who brief the highest levels of government on options for responding to conflicts.”

Mr Maloney added: “Having sanctions professionals sharing information and coordinating actions early and often will help the US government find persons of interest on both continents with a quick email instead of hunting for months to find the right people with the right information.”

Practitioners are looking for the next step to be some kind of unified advice from the offices. Mr Northage said: “While the UK, the US and other allies have sought to apply a joined-up approach to Russia-sanctions implementation, the sanctions themselves are not identical and there have also been differences in timing. It is hoped that this enhanced partnership between OFSI and OFAC will help to alleviate the burden on businesses having to grapple with these divergent approaches. The prospect of some kind of joint guidance being issued is also a welcome step.”

Is it a coincidence that OFSI has moved closer to the OFAC post-Brexit? Mr Northage doesn’t think so. “As the UK forges ahead with its independent sanctions regime post-Brexit, it is no longer confined by having to discuss the position with 27 other countries. The UK can be more flexible in its approach and act quickly.

“A recent example is the Economic Crime (Transparency and Enforcement) Act 2022, which was fast-tracked through Parliament following Russia’s invasion of Ukraine. The legislation introduced an urgent procedure to make it easier to adopt sanctions imposed by other jurisdictions and, crucially, introduced a strict liability test regarding OFSI’s power to impose monetary penalties for breaching financial sanctions.”

Mr Northage said the strict liability test means that “in determining whether there has been a breach or a failure to comply with an obligation, any requirement to have ‘known, suspected or believed’ any matter will be ignored. The UK joins the US which already operates a strict liability test, with both regimes already sharing similar extraterritorial reach and the ability to issue civil monetary penalties and general licenses authorizing certain activities.”

While the UK and the US may be on the same page with their sanctions outlook, one cannot help but comment on OFSI’s youth compared with the seasoned OFAC. The US Treasury office also has a larger, more experienced staff with greater resources. That said, with OFSI’s plan to increase its staff to around 100 by the end of the financial year, its intentions are by no means half-baked. Sanctions activity looks certain to grow in the UK in the 2020s.