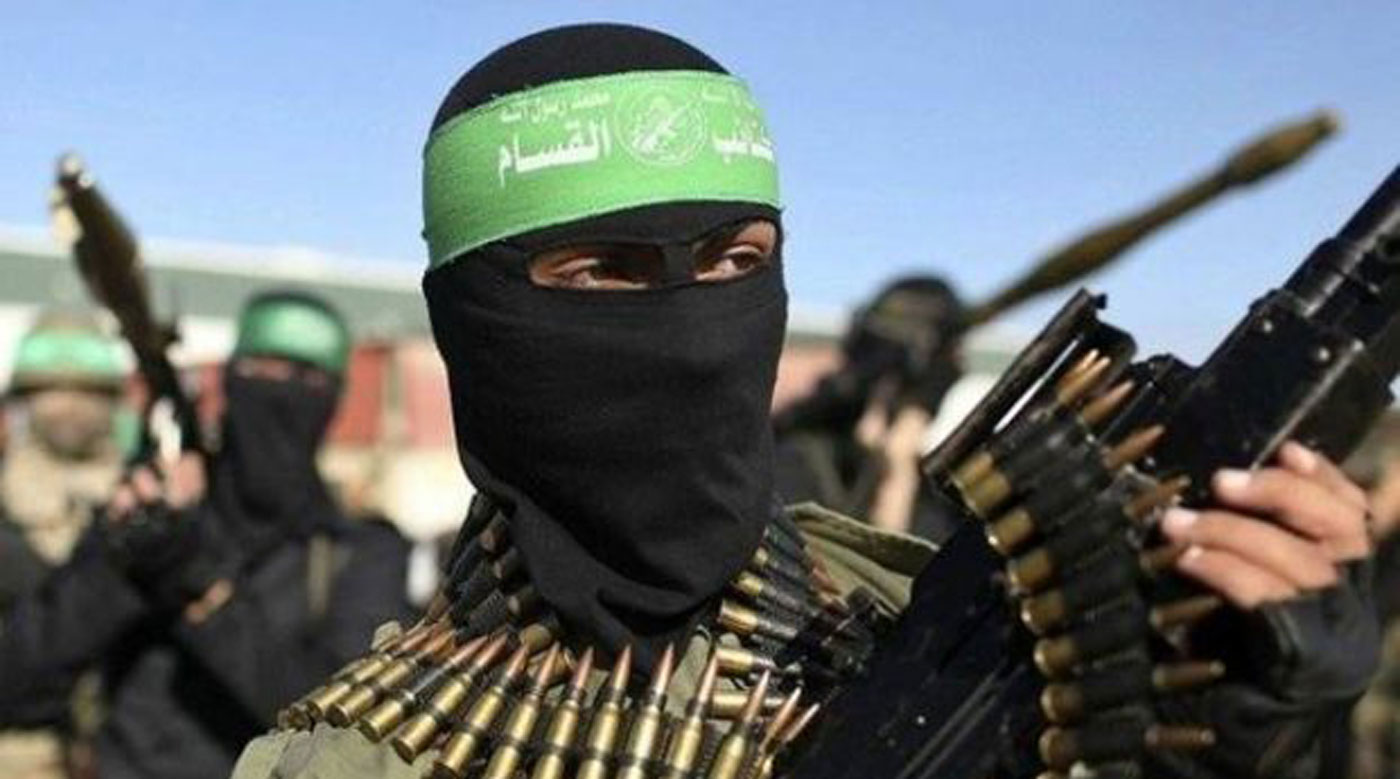 Widespread Failure to Comply with Standards for Terrorist-Related Sanctions

For the first time, the Financial Action Task Force (FATF) – the global money-laundering watchdog – has issued a public report about how well member countries comply with its standards. The evaluations are mutual peer reviews conducted by government experts.

Report on the State of Effectiveness and Compliance with the FATF Standards, published in April, assesses the strengths and weaknesses of countries’ laws, regulations and enforcement to combat money laundering, financing of terrorism and proliferation of weapons of mass destruction (WMD) systems. The report also gives insight into how countries have  implemented United Nations’ financial sanctions.

The FATF plays a central role in global efforts to combat money laundering and terrorist financing, including setting standards to combat these crimes. Its recommendations provide a legal and institutional framework that gives jurisdictions the tools needed for anti-money laundering and combating the financing of terrorism (AML/CFT), among them targeted financial sanctions and freezing of terrorists’ assets. The FATF regularly reviews its member countries’ compliance with its recommendations primarily based on risk.

However, six of FATF’s 40 recommendations are viewed as vital building blocks for a functional AML/CFT regime, regardless of the risk and context. These recommendations make up the “big six”. If a country is rated non-compliant or partially compliant (NC/PC) in three or more of the big six, it may be subject to a rigorous review.

Countries should implement targeted financial sanctions regimes to comply with United Nations Security Council resolutions relating to the prevention and suppression of terrorism and terrorist financing.
The resolutions require countries to freeze without delay the funds or other assets of, and to ensure that no funds or other assets are made available, directly or indirectly, to or for the benefit of, any person or entity either (i) designated by, or under the authority of, the United Nations Security Council under Chapter VII of the Charter of the United Nations, including in accordance with resolution 1267 (1999) and its successor resolutions; or (ii) designated by that country pursuant to resolution 1373 (2001).

Examples of UNSC resolutions covered by recommendation 6 are resolutions 1267 (1999), 1989 (2011) and 2253 (2015) concerning ISIL (Da’esh), Al-Qaida. These resolutions have designated hundreds of individuals on the UN sanctions list and cover the following measures:

An example of a UNSC resolution containing sanctions that prevent proliferation is Resolution 1718 (2006) on North Korea. This imposes several obligations on all UN member states, such as preventing the direct or indirect supply, sale or transfer to the DPRK, through their territories or by their nationals, or using their flag vessels or aircraft, and whether or not originating in their territories, of items relevant to nuclear, ballistic missiles and other WMD-related programs.

All UN member states are further required to implement a binding dual-use “catch-all” provision to apply the above measures on any item if the state determines that it could contribute to the DPRK’s nuclear or ballistic missile programs, other WMD programs or other activities prohibited by the resolutions.

All UN member states are required to expel DPRK diplomats, government representatives, other DPRK nationals acting in a governmental or representative office capacity, and foreign nationals working on behalf or at the direction of a designated person and/or entity or of a person and/or entity assisting in sanctions evasions or violating the resolutions.

The conclusions from the April FATF report show, in general, poor compliance with recommendations related to financial sanctions. There is an underperformance of effective implementation of targeted financial sanctions, which countries find challenging, says the FATF.

When it comes to freezing and confiscating terrorism-related assets and implementing targeted financial sanctions for terrorism finance, the FATF says the majority of countries are ineffective. For most, there are still barriers to implementing UN targeted financial sanctions “without delay.” On average, countries take too long to transpose the entities or individuals designated by the UN Security Council.

Further, the report reveals that designated non-financial businesses and professions have a poor to unclear understanding in 70% of cases of their obligations regarding targeted financial sanctions for proliferation financing. 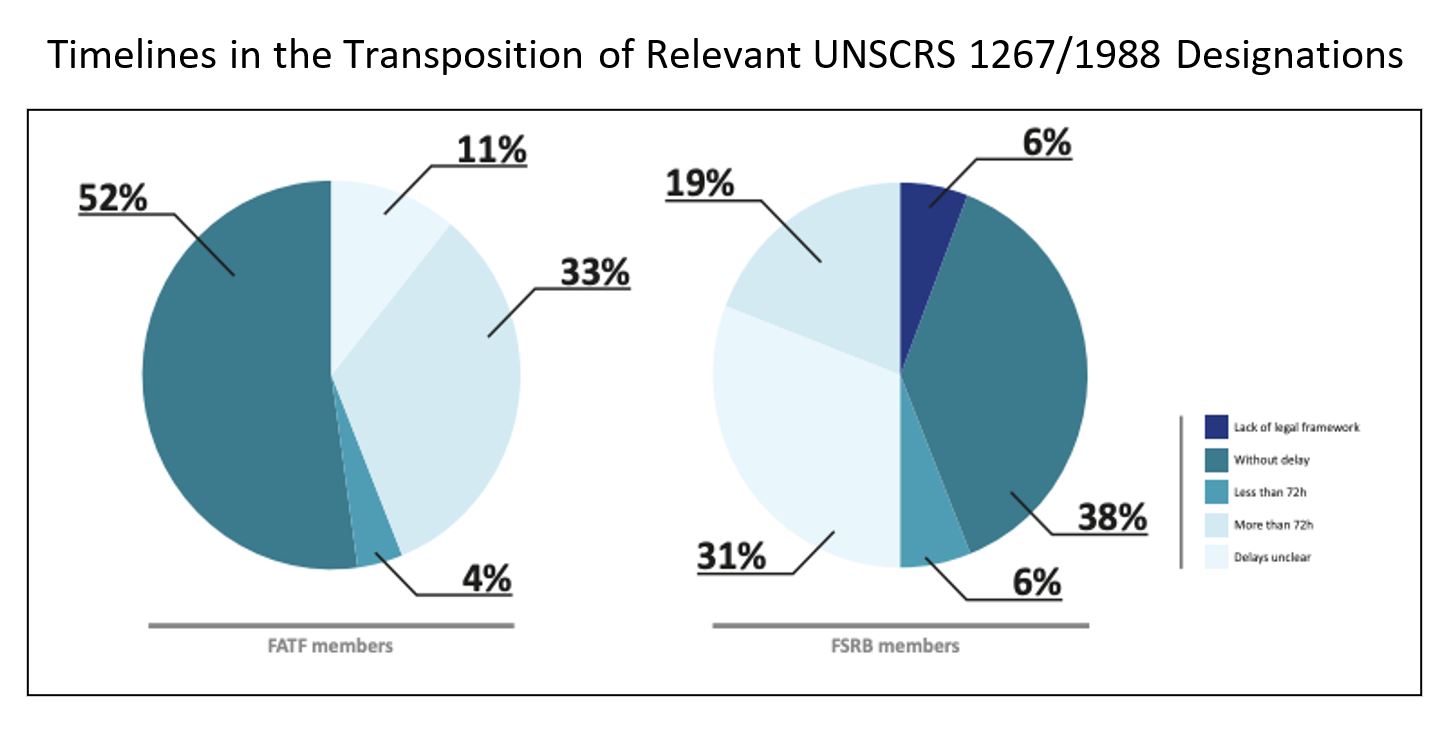 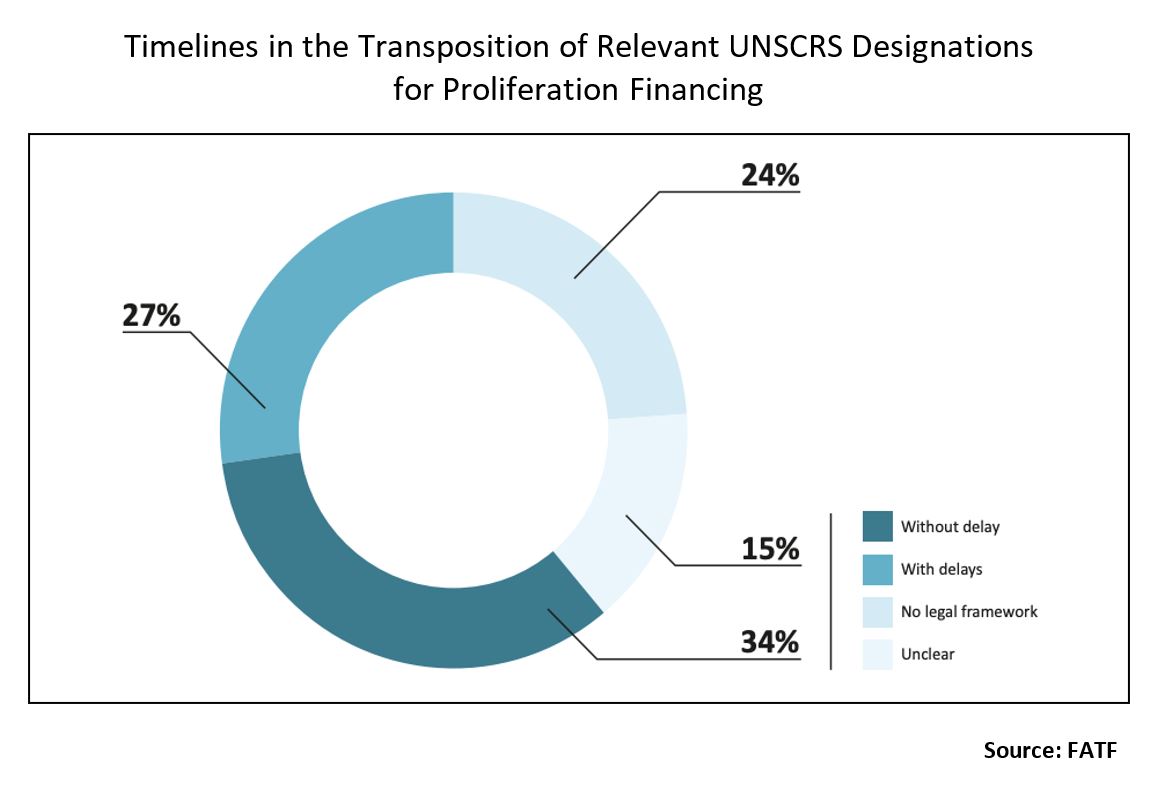 Most countries have not yet developed the legal framework to implement, without delay, targeted financial sanctions related to proliferation financing when they are called for by the UNSC (a requirement of the FATF recommendations). Only 34% of the 59 sampled jurisdictions transpose UNSC designations without delay.

With proliferation financing, the FATF says that countries should work to enhance their overall technical compliance with Recommendation 7. Many jurisdictions lack a legal mechanism to implement relevant targeted financial sanctions without delay.

What Needs to be Done?

The FATF recommends that countries should provide guidance to relevant private sector entities on the potential risks of breach or evasion of targeted financial sanctions. The “relevant” sectors are specifically mentioned in the report: correspondent banking services, trade financing, and virtual asset service providers.

Further, countries should subsequently ensure targeted financial sanctions for proliferation financing are implemented without delay in practice, including through clear communication and outreach to the private sector.

On a positive note, according to the FATF, several countries do well preventing terrorist financing and proliferation financing. These countries have many, if not most, of the following traits:

Implementation Must be Effective

Professor Thomas J Biersteker, the Graduate Institute, Geneva, stresses the importance of sanctions implementation if countries are going to make advances in fighting terrorism. ”It is vital to the effectiveness of sanctions policy. Sanctions will never work if they are not implemented properly, which entails both prompt action and the provision of legal cover for firms and other corporate entities to apply the restrictive measures.”

Professor Biersteker says that when he teaches policy implementation, he refers to it in stages that comprise “translation into a domestic legal framework; second, identification of an administrative infrastructure; third, introduction of specific regulatory measures; and fourth, the establishment of enforcement mechanisms.”

Professor Biersteker says that many large firms do not wait for the kind of legal protection called for by the FATF. “Rather, they act without waiting for legal protection, because they are more concerned about running afoul of OFAC.”