The Association of Certified Sanctions Specialists offers an examination that addresses knowledge and skills common to all sanctions professionals in varied employment settings, including financial institutions, international corporations, law firms, consulting companies, government, and other trades and businesses.

The objective of the certification program is to set the standard for the sanctions profession, and to make Certified Sanctions Specialists (CSS) widely recognized as trained and credentialed specialists in the sanctions field. It is a multiple-choice, proctored exam that can be taken in testing centers across the globe. 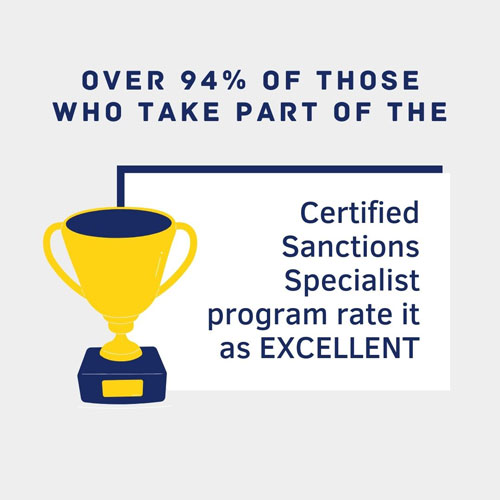 The certification exam is universal and does not just focus on one country or one industry. It validates competence and skill across the sanctions spectrum, including policy, due diligence, screening, compliance, investigations into sanctions evasion and more.

Once you become a Certified Sanctions Specialist, you will be seen as an expert in legal and regulatory proceedings regarding sanctions, increasing your credibility and competitive advantage.

As a private organization, having Certified Sanctions Specialists on your team improves your image and reputation, and shows that you are dedicated to having a trained compliance staff.

Benefits of Certification for the certified sanctions specialist

Certification will support and enhance career advancement opportunities. Employers know that most certified professionals have personal characteristics and technical skills that are positive attributes to institutions; for example, a high achiever.

The days are over that just anyone can be a sanctions compliance officer. Every financial institution should be hiring a knowledgeable specialist to fill compliance positions. With the CSS credential, the interviewing institution is likely to give more consideration to the certified candidate.

Certification should be recognized by various institutions across the globe through financial incentives. Certification will also increase the demand for CSS and enhance the value of the skills and services of the Certified Sanctions Specialist.

Benefits of Certification for the employer

Financial institutions, companies doing business internationally, such as maritime shipping, oil and gas, telecom, etc, attorneys seeking expert witnesses, consultants and investigators should market if they employ certified sanctions specialists. It is a very strong statement to the public, regulators and auditors when a compliance department can state that they have certified specialists.

Specialists who are certified tend to be high achievers, have a higher self-esteem and seek opportunities for professional growth. These are professionals that want to know the latest information in the sanctions field and take pride in the services they deliver; a valuable asset for the institution in which they are employed.

The CSS Exam Prep Virtual Classroom is a live web-based study course, which provides candidates of the Certified Sanctions Specialist (CSS) designation additional guided instruction to help retain and reinforce the key concepts covered in the CSS study guide. The CSS Exam Prep Virtual Classroom will keep you on track towards becoming a Certified Sanctions Specialist.

What Will You Learn?

Turn on the news and you hear about sanctions. They are used in ways never seen. The CSS program defines the body of knowledge underlying sanctions risks, administration, compliance and enforcement.

The exam covers sanctions from an international and cross-sector point of view.

In as little as three months, individuals and teams can gain certification.

Steps to Getting CSS Certified

Candidates wishing to sit for the CSS Examination must:

Click below to download candidate handbook, which provides information on the process to obtain the CSS Certification.

You have two options:

Please click on the link below to get additional information on pricing and schedules.

If you purchased the Virtual Classroom Package, you will be scheduled for the next session.

NOTE: These classes provide you with 12 hours of credits towards your eligibility requirements

Find a testing center near you

Who can take the exam?

Individuals who have met the minimum qualifications can sit for the exam. Eligibility requires a minimum scoring based upon a combination of factors. Persons who have not yet met the minimum levels required can take continuing education programs with ACSS or other sources to reach the minimum requirements. (40 credits, see www.sanctionsassociation.org)

What topics will be on the exam?

The exam will focus on various aspects of the sanctions subject. A job analysis will determine the content and the importance of each knowledge area for the specialists in the field. The certification exam will be tailored to international best practices and basic frameworks for sanctions efforts around the world.
I. Sanctions Regime Types, Goals, Prohibitions and Effects
II. Sanctions Imposers and Targets
III. Sanctions Evasion: Typologies and Schemes
IV. Essential Components of a Risk-Based Sanctions Compliance Program in Different Industry Settings
V. Role of Technology and List Screening
VI. Other Operational Issues Contributing to an Effective and Efficient Sanctions Compliance Program
VII. Enforcement and Conducting or Supporting Investigations into Sanctions Violations

Who is eligible to take the exam?

ACSS Certification eligibility is based on a points system. Candidates who wish to take the CSS Examination must have a minimum of 40 qualifying credits based on education, other professional certification, and professional experience in the sanctions field, in addition to providing 3 references.

I passed the CSS exam and my company paid for it. When I leave the company, will I keep my credential?

The CSS exam will be the product of collaboration between ACSS, its job Analysis Taskforce, and an independent company with expertise on research, testing, measurement, management and technology. The result will be a psychometrically sound exam that assures the quality and soundness of the ACSS certification program.

How is the exam administered?

Since ACSS members reside worldwide, we use a computerized exam. Exam can be taken in a brick and mortar testing center or using online proctoring. We offer the exam throughout the year. ACSS offers an online exam preparation publication with sample exam questions. Requirements to sit for the exam include the completion of an ACSS exam application and payment of an application fee plus the costs for the testing service at the time of them exam. Please check the CSS candidate handbook for more details.

Which is the CSS credit award system for examination eligibility?

What are the recertification requirements?

In order to recertify the CSS credential, you must meet the following requirements:

A total of 60 continuing education credits must be accumulated within a three-year cycle. These can be sanctions or export controls related courses from ACSS, internal training, or other providers.

Applicants will not be granted continuing education credits for activities completed prior to obtaining their CSS credential or their most recent recertification.

Additional credits earned past the required 60 cannot be rolled over to the following cycle.

The deadline for earning continuing education credits is December 15 of the year of your recertification.

A late fee of US$50 will be applied to all applicants who miss the December 15 deadline and will be accepted for only 90 days after the deadline.

Applicants do not need to include supporting documentation along with the recertification application; however, they are advised to retain original copies of their supporting documents in their files in the event that ACSS should find it necessary to audit their records.

Late Application $300
Application and fee received by ACSS no later than March 31. For more information on the Recertification: Visit https://sanctionsassociation.org/css-recertification-2022/.

Additional questions? Contact ACSS for more information, Please email helpdesk@sanctionsassociation.org and we will get back to you soon!

Martijn Feldbrugge, Director of BSCN BV (Business & Sanctions Consulting Netherlands) studied business administration and has worked for various financial institutions for more than 20 years. With a background in ICT, broad knowledge of the financial industry, strong analytical capabilities and the business administration education, he implemented solutions for complex situations. Since 2005, he setup and executed sanctions and export control compliance functions for two major Dutch financial institutions after they were subject to an enforcement action by US authorities. In 2011 he founded BSCN, which supports financial and non-financial institutions and companies in developing and implementing policies, processes and procedures related to compliance, sanctions and export controls. He is valued by the Clients for his enthusiasm, his analytical skills, his broad network and his out of the box views.

Ian is a career banker with experience across EMEA, who has a proficiency in sanctions risk management. He specialises in tailoring sanctions compliance programs for front-line businesses in wholesale banks.

Scott Nance from Langley Compliance Consulting. Based in DC. He is an attorney specializing in economic sanctions and anti-money laundering. He helps companies comply with economic sanctions, answering their questions about what they can and should do. Uniquely, he has worked inside several large European banks, and was the Global Head of Sanctions Compliance for ING in Amsterdam, he has also done extensive work in the fields of international trade and economic policy, and have had the opportunity to advise a number of governments in Africa and Asia on trade policy. He teaches International Trade Law and Investment at William & Mary Law School and has lectured on economic development and international trade at the University of Virginia. Scott is a member of the ACSS editorial Task force and the ACSS Certification Task Force.

Executive Director and Co-Founder of ACSS

Saskia is the Executive Director and Co-Founder of the Association of Certified Sanctions Specialists (ACSS), a professional membership body for sanctions professionals worldwide. She is a Certiﬁed Sanctions Specialist (CSS) and Certified Anti-Money Laundering Specialist (CAMS) and an industry leader in ﬁnancial crime topics. Saskia has over 15 years of Sanctions/AML experience in the U.S., Latin America and Europe. Her global footprint enables Saskia to apply valuable expertise and insight into international training and ﬁnancial crime compliance projects.

She is a frequent speaker in English, Spanish and Dutch on a variety of ﬁnancial crime topics.

She earned law degrees from Leiden University (Netherlands) and Universidad La Católica (Lima, Peru), and was admitted to the Lima Bar Association. She also holds an international MBA from Florida International University. She speaks ﬂuent Dutch, English and Spanish, as well as basic German.

«The overall experience was very good. I enjoyed all the parts of the certification journey. The whole ACSS team was very helpful and understanding. Always a pleasure interacting with the ACSS family.»
Konstantinos Michalopoulos